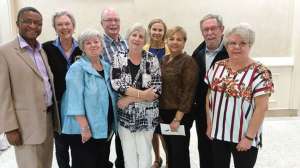 On Oct. 30, 2017 the Catholic Register published an article by Ron Stang. In this piece he profiles Sr. Helen Petrimoulx and the great work she has done for refugees over the past several years in Windsor. She is called the “refugee specialist” and spearheads the fundraising for the Community Refugee Fund.

Marion Overholt, executive director of Legal Assistance of Windsor, a non-profit legal aid clinic, says “Sr. Helen has played a pivotal role and I know that, as a person of faith, she has offered that love and caring and financial assistance to refugees when other people just were oblivious and didn’t care.” Petrimoulx’s work with refugees has been recognized with several awards, including an honorary doctorate from the University of Windsor and the Order of Ontario.

Petrimoulx said many of the refugees who end up in Windsor are from countries in Africa like Zimbabwe, Rwanda, Uganda and Democratic Republic of Congo. However, Windsor has also been attracting refugees who originally landed in Toronto and Montreal, but are looking for a smaller city with a less intimidating atmosphere.